The Hidden Treasure of Heroic Cause

With the Thrivable World Quest, we’ve embarked on a huge group treasure hunt across multiple cities to explore the conditions needed for organizations to be truly in alignment with how life thrives and how people thrive.  Over ten months, we’ll stop at ten “islands” – different themes that we’ve found to be vital points of leverage in an organization.  On January 23rd, we explored the first island: Heroic Cause.  Our simple starting point in the exploration was the belief that a thrivable organization has to serve some bold Heroic Cause.

Here are three gold nuggets we discovered in our exploration of that belief.

1. There is a monumental – and multi-faceted – need for Heroic Cause in organizations.

Beyond watered down, boilerplate statements of mission, vision and values, there is a critical shortage of the truly heroic in organizations around the world.  The corporate social responsibility and sustainability movements have been our best hope, but they’ve gotten stuck in the intellect and the incremental.  Questers universally craved more and sensed that far more is needed.  Our enterprises aren’t being bold enough either to address the challenges humanity faces or to serve our individual need for meaning and heroism.  And in falling short, they’re also not inspiring our loyalty as customers.

2. There is a virtuous circle around Heroic Cause and courage.

A Heroic Cause demands courage.  And so we hesitate, wondering if we have enough.  But what we heard during the Quest is that each of us has an innate need to do something courageous.  Our lives are not fully meaningful without it.  We also heard that to be courageous, we need a Heroic Cause.  It’s a virtuous circle that hasn’t been set in motion by the story we’re living in now. The courage we need is available in unlimited supply, in each of us.  But it’s waiting for a Heroic Cause that’s worthy.

3. What’s needed is a playful, piratey-style Quest… (no, really!) 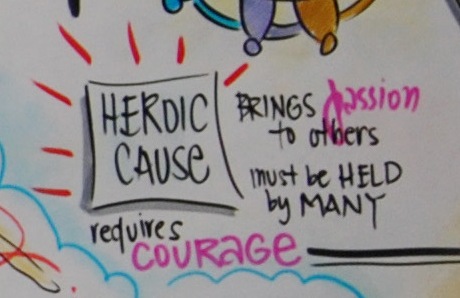 We probably shouldn’t have been surprised that the stories people shared contained the basic characteristics we imagined for the Thrivable World Quest itself.  (Read here about why we chose to launch a playful, piratey learning adventure.)  A Heroic Cause is necessarily rebellious, bucking against what is.  In the stories we heard, the people involved had their wits, their resolve, the elements, and each other.  Against all odds, they were enough.  They did whatever it took – even if it wasn’t written in a job description – and they did it with cunning and creativity.  There was urgency, and a sense of adventure.  There was struggle and uncertainty.  But most of all there was a deeply fulfilling sense of passion.

These are stories of vitality and aliveness.  Of thriving.  Of a life worth living.

When did we agree to a life of comfort instead of courage, anyway?  And has it gotten us to a place we want to be?

« Ten Frames » The Life-Cycle of the Heroic Organization