“A Playful, Pirate-y Quest” – Why Pirates? 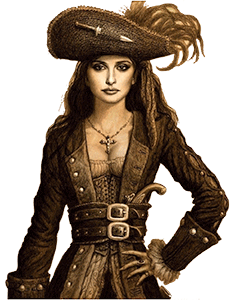 From the beginning, we’ve had a strong instinct to weave pirates into the Quest. There is something delightful about going in search of treasure.  About adventuring in uncharted territory.  And about being thrown in as part of a motley crew that sings songs, has each other’s backs, works hard, plays hard, shares in the booty, has a clear code of conduct, and has a very good time.  There’s also something about being subversive.

In fact, the meme of Pirates is popping up all over the place.  There’s global ‘Talk like a Pirate’ day on September 19th of every year.  Dave Eggers, in his tremendous TED talk about 946 Valencia told us about how the building he got in San Francisco to pair writers with kids struggling in school was zoned for commercial use – so they created a popular-beyond-their-dreams Pirate Supply Store just to appease the zoning regulations.

The backdrop of the old pirates was the British drive for empire at the heart & soul of the industrial revolution.  At a time when nations were being systematically relieved of their resources in the name of Queen and country, these guys were on non-sanctioned treasure hunts of their own.  And while people – men, women & children – were being enslaved in service of large machines, the pirates were out in the open air, looking for adventure, connecting with nature and other cultures.

So here’s our challenge. For us, we’ve always had in mind playful, benign, generous, treasure-seeking pirates.   How might we evoke that image – yet not lose the sense of adventure, danger, or subversion that is useful to our Quest?  How might we keep the positive qualities and edginess without evoking the rape, pillage & murder aspect (on which we are not so keen)?

For the record, there were good pirates and bad pirates.  Evil guys who did a lot of damage and good guys who helped a lot of people while being ‘anti-establishment’, anti-empire, anti-‘the-machine’ and thus labelled ‘pirate’.  A similar sort of vilification of powerful, benign anti-establishment people is still going on today.

Our Quest at its heart is deeply subversive to the current way we perceive of and run organisations.  We’d like to crack open Business As Usual.  We’d like to fundamentally transform it.  And the treasure we are seeking lies in us, in the knowledge of bold pioneers around the world, and in nature – literally in nature – buried in the sand, in the plants, the animals, and all living systems.  The treasure in nature has been there all along – we just covered it over with machines, concrete, and stories that make us separate from nature. That make us see ourselves as better and dominant.

So how might we uncover this treasure that rightfully belongs to all of us?  How might we share it amongst ourselves and with the world?   Come find out.

Welcome to the Thrivable World Quest : )

« The Life-Cycle of the Heroic Organization » What is Thrivability?